8 Of the Greatest Talkshow Moments in TV History

8 Of the Greatest Talkshow Moments in TV History

In this article I will be giving the limelight to eight of the greatest talk show moments in modern TV history, handing over the stage to these women who shot back at Hollywood misogyny.

Jane Fonda has been a feminist and political icon for decades; with her exercise video that brought her to fame, to lending her house to the Black Panther organization during tense moments in American equal rights protests. Jane Fonda is a brilliant woman.

Even today, Fonda continues to protest for what she believes in and doesn’t have time for those who would waste hers. The specific event of which I speak is the interview on Megyn Kelly Today, where Kelly asks Fonda a particularly inappropriate question: ‘…you admit you’ve had work done… I read that you felt you’re not proud to admit that you’ve had work done. Why not?’. Fonda, handing this rude question with her usual grace, answered, ‘We really wanna talk about that now?’. Kelly, laughing along with the audience, realizes her mistake and follows Fonda’s lead in steering the focus back to the reason for the interview; the new film Fonda is staring in. Snaps for Jane Fonda. 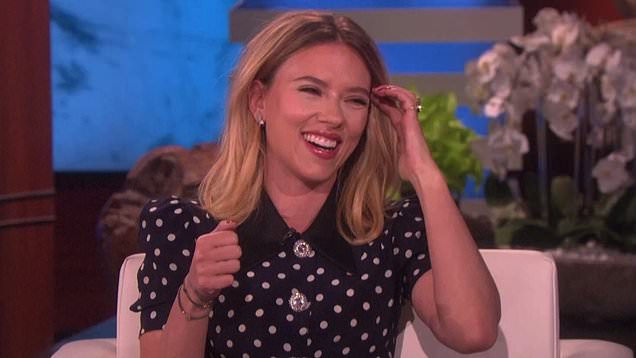 Scarlett Johansson has forever been at the unappealing end of sexist questions. Each time she deftly puts the interviewer in their place makes light of their question, which garners laughs from her colleagues and audiences, and makes everyone present aware that she is not the least impressed with being asked these sexist questions. One of my favorite interviews where she swiftly makes her thoughts on the statement known is in an interview alongside her cast member Samuel L. Jackson.

During the interview, the host makes the statement ‘That’s what women do though, isn’t it.’ Johansson immediately inhales, probably not believing she has to keep doing this. ‘There’s always a good woman behind the camera.’, continues the host. Johansson jumps in with, ‘Or in front of, on the side.’ The host, hopping back in states,‘Either way, looking gorgeous.’ Johansson says, ‘Thank you very much. Well, you know what that’s. – I can also be used as a sparkly object to distract the spirit… he’s just like, “look at this shiny thing”, yeah.’ Johansson makes it very clear she’s not pleased with being demoted to “pretty thing at the side of the screen”, putting the host rightfully in her place.

Another one of Johansson’s interviews clearly shows what Johansson thinks of sexist stereotypes towards women and girls. She reinforces that we can be the best at sports, and can get the besten bastel geschenke für mädchen, and not have to adhere to the stereotypes we’re assigned.

On a red carpet interview, Rihanna was asked ‘What are you looking for in a man now?’. Rihanna glares at this reporter and says, ‘I’m not looking for a man. Let’s start there.’ We love Rihanna. Can we clap, please?

During an interview on her new film Beauty and the Beast, Emma Watson conveys an anecdote where ‘They were saying that I couldn’t be a feminist… and have boobs… Feminism… is about freedom, it’s about liberation, it’s about equality… I really don’t know what my tits have to do with it. It’s very confusing.’ We love Emma Watson for being blunt, standing up for feminist rights, and educating us all.

Simone Biles, a professional dancer, was called upon not smiling when compliments were given to her; ‘I was waiting for you to smile at some of the comments; you didn’t.’ ‘Smiling doesn’t win you gold medals.’ Snaps for Simone Biles, for telling the world that women don’t owe you any reaction and breaking the myth that we’re demure.

Serena Williams has faced so much sexism during her sporting career; from being unjustly critiqued on the court, unnecessarily gendered on wins, and even the subtle versions of sexism, that sometimes hurt the most. Williams states, ‘I would really like to thank Sports Illustrated for recognizing me not just as sportswoman or sports of the year, but just sportsperson of the year…’. You’d think it was a simple recognition, but this means everything. Keep on winning, Serena.

Anne Hathaway was sexually harassed on the red carpet and then in an interview was asked ‘…what’s the lesson learned from something like that…’. Hathaway swiftly responds and expresses her disappointment; ‘… I was very sad that we live in an age which when someone takes a picture of another person in a vulnerable moment and rather than delete it and do the decent thing, sells it and I’m sorry that we live in a culture that commodifies sexuality of unwilling participants, which brings us back to Les Mis because that’s what my character is…’. Hathaway steers the interviewer back to the important topic and the same time brilliantly tells him what she thinks. So many snaps for Anne. Thank you.